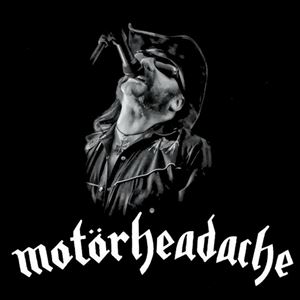 A top class and authentic tribute to the late, great Lemmy Kilmister and his band, Motörhead.

Motörheadache is a three-piece tribute to Lemmy's musical career with Motörhead from 1975 to 2015. Set up by lifelong Motörhead fan Rob Campbell on Rickenbacker bass and vocals, Rob captures the essence of Lemmy in voice, stage clothes and his grinding mid-range bass sound.

As ‘Lemmy Kidderminster’, Rob plays a custom built Rickenbastard 4004 bass made my Lemmy’s own luthier, which is fitted with the pickups and tuners that were removed from Lemmy’s own Rickenbastard when it was serviced. Rob also has a custom made Lemmy ‘Murder One’ Marshall Super Bass wired to the same specification as Lemmy’s and two Marshall 4x15 cabs with 4x12 cabs either side of the stage.

Guitar duties are taken up by Shane Haigh, who is also a successful luthier and known as The String Surgeon (www.thestringsurgeon.co.uk). On drums it’s Dirty Dave Nutter, who also drums part time with York based band, Segregates (www.segregates.co.uk)

Motörheadache have toured the UK and Europe extensively from February 2016 and embarked on their “Born to Booze, Liver Die” tour in 2018/19 with over 70 dates, including biker rallys, large festivals and showcase gigs in O2 Academy venues in Glasgow, Newcastle and London. European dates have included Switzerland, Bratislava, Amsterdam, Lindos, Cyprus and the first tribute band to ever play Hard Rock Hell in Ibiza.

The main body of the Motörheadache’s set list comprises a large number of songs from Motörhead’s Fast Eddie Clarke era, regarded by many Motörheadbangers as the classic era from 1975 to 1982. Songs include “Ace of Spades”, “Bomber”, “Overkill”, “Iron Fist”, “The Hammer”, “Damage Case” and the thunderous “Motörhead”.

Motörheadache also play material written by Motörhead from 1983 through to 2015. Songs from this period include “Killed by Death”, “In the Name of Tragedy”, “Sacrifice”, “Ramones” “Burner” and “Victory or Die”.

Motörheadache are proud to help keep alive the music of Motörhead by playing gigs all over the UK and Europe and invites Motörhead fans to celebrate the life and work of a rock icon and legend, Mr Lemmy Kilmister.