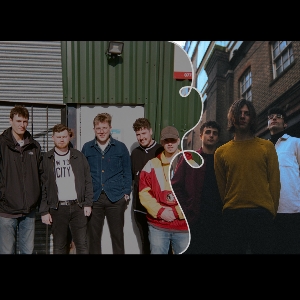 Forming in Guildford in 2017, Simple Fiction have quickly gone from strength to strength, crafting a raw sound that’s reminiscent of the UK Indie scene’s big-hitters, whilst still letting their own individuality shine through. Having already supported the likes of BLOXX, Vistas and CHILDCARE Simple Fiction are quickly going from stride to stride, unquestionably soon to leave their mark on the UK Indie scene.

Simple Fiction has garnered support from the likes of VEVO, BBC Introducing, NME & Indie Radar. Given that their live set is already crammed with exhilarating exuberance, and their upcoming releases embody the band’s boundless ambition.

With their mixture of addictive guitar riffs, deep grooves and honest vocal hooks, Simple Fiction have quickly asserted themselves as ones-to-watch in the UK guitar scene. Effortlessly combining anthem-worthy hooks with introspective lyricism, Simple Fiction manage to epitomise the feelings of a whole generation who are feeling increasingly betrayed and exasperated.

“One of the most promising indie bands to emerge in recent memory.” – tmrw

The Berkshire-based indie outfit Rila’s Edge has been winning over fans with their anthemic stadium indie rock. They have nurtured a nostalgic sound that is reminiscent of rock bands of the early 2000s but seen through a modern lens. The tracks are set apart by driving, distinctive vocals with comparisons made to early U2, Foals, and The Killers. Sounds like an early, spunky, 80’s U2, with a little bit of foals in there as well” (Shaun Keavney, BBC 6 Music DJ, 2020)

“You can be as edgy as you want but there is always a special place in your heart for an indie banger”. (Jack Saunders, BBC Radio1 DJ, 2021)

Boasting not only a multitude of sold-out shows, ‘Track Of The Week’ from BBC Introducing Berkshire, and frequent radio play, they’ve further established themselves with a feature on both Spotify’s ‘Fresh Finds: Rock’ and ‘Fresh Finds Rock: Best Of 2021’ playlists. Leading from the success of their first four singles and debut EP, expect a load of new crisp music into the new year and throughout 2022.