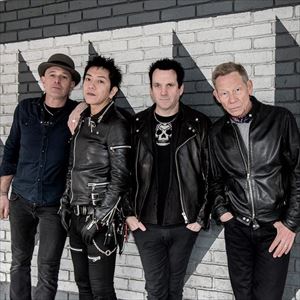 All The Professionals performances

Formed by Paul Cook and Steve Jones, The Professionals arrived on the scene in 1979 following the demise of the Sex Pistols, but split just 3 years later.

In celebration of the release of a three-disc set by the Universal Music Group, The Professionals reformed in October 2015 (minus Steve Jones and with the addition of Tom Spencer) for a critically acclaimed, sold out 100 Club show. Fast-forward to 2017 and the new band spearheaded by Paul Cook, Paul Myers and Tom Spencer released the first material under the Professionals name in 35 years with the full blessing of founding member Steve Jones.

What in the world was released to critical acclaim:

Although The Rebellion and Isle of Wight festival crowds were treated to the new live line up, featuring Chris McCormack (3 Colours Red), taking on the mantle of covering all those album guitar guests.

Also during this year, original bass player Paul Meyers had to step aside for health reasons, but Toshi JC jumped up from tech to bass player to amply fill his shoes.

They went down a storm supporting Billy Idol on his English dates; however it was trips abroad to Germany, Sweden, Spain, Hong Kong and Japan that saw the band develop into the formidable live force that’s out there now.

are a? ???Reading-based high-energy ?punk/post-punk band, and an incendiary live act.

"It's really worth getting to see these guys" - Punkarolla

Influences range from early British art punk (Wire, Magazine, Gang of Four, Killing Joke) to later US bands like Black Flag, Fugazi and the Adolescents, right up to current acts like No Problem and Idles.

Since 2016 the band has gigged in the UK, Italy and France, in recent years averaging 50 gigs a year.