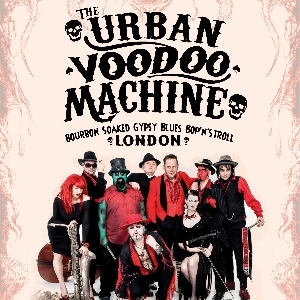 All The Urban Voodoo Machine performances

"We're not Americana and were definitely not 'retro'," says Angel. "I write songs about living in London right now. Although having a shit time, no money, heartbreak, mental illness, addiction and suppression from the big guy is kinda universal and timeless, I guess?"

?Yeah-yeah-yeah,? you're thinking, ?but can they cut it live?? Well, there's a reason why they've played Glastonbury, Download, Latitude, Bestival, Hard Rock Calling and toured with The Pogues and New York Dolls. With an act honed alongside the burlesque dancers, snake-charmers and fire-eaters they call friends, The UVM have become one of the greatest live acts in the country - terrifyingly bizarre, hysterically funny; a riot for the eyes and sensation for the ears: a sing-a-long, drink-a-long, clap-a-long affair.

Magazines and newspapers have lauded them for their ?mariachi-influenced blues, whiskey-soaked country rags and punkabilly-style rave-ups? (The Washington Post) and noted that they're ?drawing deep from a dirty well where Tom Waits, Nick Cave and Dick Dale are enjoying a burlesque all-nighter with Ennio Morricone" (Classic Rock). They became one of the few bands that could appear on Clive Anderson's Loose Ends on BBC Radio 4 and Britain's biggest heavy metal festival Download in the same year and win at both.